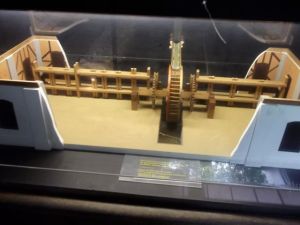 Rio’s Jardim Botânico, or Botanical Gardens, is definitely one of Rio’s more delightful attractions, popular with both local residents and tourists. It is my favorite place for taking a walk, and apart from its obvious botanical attractions, is also interesting from a historical point of view. Visitors are sometimes puzzled by the ruins of a gunpowder factory nestling among the flamboyant vegetation.

When Dom João VI arrived in Brazil in 1808, assisted by the British navy in his flight from Napoleon, and made Rio the seat of his Empire, his mind was obviously on war and the needs of a warring nation. One of the first things he did was to negotiate a piece of land that stretched from the Lagoon to the Corcovado mountain. There was a sugar plantation belonging to Rodrigo de Freitas, and Dom João converted the sugar mill into a gunpowder factory. Brazil had been supplying Portugal with saltpeter since colonial times, so the ingredients were readily available. The factory was closed in 1826, for reasons of safety, and production was moved further out of the city, on the way to Petropolis, where the Royal Family spent their summers. One of the buildings – the Pestle Mill Workshop, has been restored on the outside, and the inside dug up to show some of the original features.

About the same time, Dom João VI, a man of vision, decided to use part of the land to acclimatize exotic spices such as nutmeg, pepper and cinnamon, imported from the West Indies. The garden was known as the Royal Horticulture, but was named the Royal Botanic Garden by Regent Dom Pedro I in 1819 and opened to the public in 1822. Charles Darwin visited the gardens in 1832, and his diary entry on that day reads as follows:

“Walked to the Botanic Garden, this name must be given more out of courtesy than anything else; for it really is solely a place of amusement. — The chief & great interest it possesses, is the cultivation of many plants which are notorious from their utility. — There are some acres covered with the Tea tree. — I felt quite disappointed at seeing an insignificant little bush with white flowers & planted in straight rows. — Some leaves being put into boiling water, the infusion scarcely possessed the proper tea flavour.” This was only ten years after the gardens had been opened, so everything was very young, and the arboretum was still being developed. Darwin also said some nice things about the gardens.

There was in fact a huge tea plantation, worked by 300 Chinese immigrants brought to Brazil by Dom João from Macau, the Portuguese colony. The tea plantation stretched up the slope of the mountain towards the Corcovado, but for some reason was never successful – maybe because Brazilians prefer coffee. The only memorial to the project is the Vista Chinesa, a point on the mountain road where a concrete Pagoda provides one of the finest views of the city, including the Lagoa, Ipanema and Leblon. Plants were brought in from all over the world, and from other parts of Brazil.

The 140-hectare park now contains more than 6,000 different species of tropical and subtropical plants and trees, including 900 varieties of palm tree. A 750m line of 134 palms forms the Avenue of Royal Palms leading from the entrance into the gardens. These palms all descended from a single tree, the Palma Mater, long since destroyed by lightning. Only about 40% of the park is cultivated, the remainder being Atlantic Forest rising up the slopes of Corcovado. The park is protected by the Patrimônio Histórico e Artístico Nacional and was designated as a biosphere reserve by UNESCO in 1992. For more on the Botanical Gardens click here.

2 thoughts on “Gardens and Gunpowder”